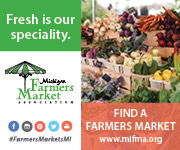 A Michigan company cooked up regional fame when it left skin in the potato chip game. The Great Lakes Potato Chip Co. produced its first bag of signature, skin-on, kettle-cooked potato chips in 2010 in Traverse City. Since then, the demand for its award-winning chips has grown 30 to 50 percent annually.

“In the world of potato chips, there are probably a handful of companies, out of many companies, that don’t peel their potatoes,” says Chris Girrbach, who owns the company with his father, Ed. “The skin gives a lot of taste and adds nutrients.”

The Girrbach family entrepreneurs rooted their future in potato chips as the father and son duo sought to combine their desire to manufacture food with their admiration for Michigan agriculture. Michigan ranks first nationally in chipping potatoes, Girrbach says, growing a potato with less sugar and starch than the russets at the grocery store. The entrepreneurs also tapped a regional food market, much like microbreweries have done over the last decade.

“The small, regional brewers are catching a foothold against the national brands,” Girrbach says. “We also thought there was room, and have proven so now, for a regional potato chip manufacturer that the state would embrace.”

In a short time, the company expanded its market to Canada and seven states in the Great Lakes area. It employs about 30 people. In 2014, the Chicago Tribune named the company’s original flavor the best kettle chip. The Girrbachs garnered gold medals for Best Kettle Chip and Best Tortilla Chip among national and regional brands at the 2016 Chip Festival in New York state.

And the company plans to keep chipping away. “We’re going to come out with some fun flavors, some really cool items for our fans,” Girrbach says, “and we will work hard to grow the business in a way that is good for our employees and what people expect out of us.”