Girrbach and his son Chris are the co-owners of Great Lakes Potato Chip Company. The company has managed to thrive as a regional purveyor of salty, crispy slices of Michigan-grown potatoes. Quite a stretch from six years ago, when the Girrbachs pulled into line alongside several semis to get a load of potatoes in their pickup truck. 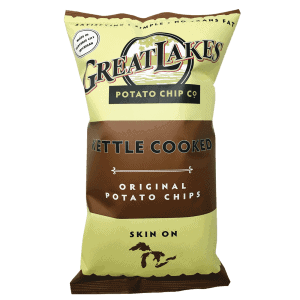 That 1,500 pounds of potatoes turned into the first bags of Great Lakes Potato Chips. Today the company produces seven flavors of kettle-cooked potato chips as well as some seasonal flavors, two kinds of tortilla chips, and two different salsas. Girrbach says this year he expects sales between $3.5 and 4 million, with next year increasing by another $1 million. He’s hopeful that in five years it will be in the $10–12 million range.

That’s pretty impressive, especially in light of the casual conversation that started the company. Ed and Chris opened Pangea’s Pizza in downtown Traverse City and were looking to expand into retail. Their first thought, naturally enough, was to move into the frozen pizza market, but looking into both production and how difficult it would be to secure freezer space in supermarkets, they decided that wasn’t the way to go. That led to the following exchange: “Chris asked, ‘Dad, what else do you like?’ I said, ‘Potato chips.’ He said, ‘Lets do it,’” recounts Girrbach.

That’s how they found themselves sitting in their pickup truck alongside the big boys, waiting their turn. Since then, Great Lakes Potato Chips has experienced remarkable growth, adding equipment—yes, including bigger trucks—and personnel. Today the company employs 30 people at its facility at 6806 E. Traverse Hwy. It has become so successful the Girrbachs eventually sold their restaurant to stake their future on chips. 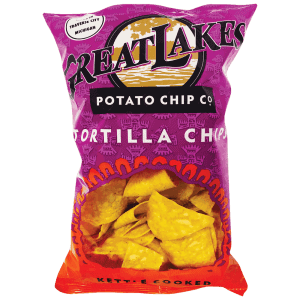 The company distributes throughout the region, including Canada. While the brand based its appeal primarily to those who call the Great Lakes region home, one of its bigger (and growing) markets is Florida. After all, explains Girrbach, “It’s like a Great Lake state in winter.”

And the company is poised for still bigger and better things. “We see a lot more potential for growth,” says Girrbach. The company is looking ahead to markets in the Caribbean, South America and China. “There’s no limit to opportunity. This is a really pivotal year for us.”

This next year will see the company invest another $1.5 million in equipment, which Girrbach says will increase its capacity by 150 percent. “We’ve had rapid growth, but we’re being really careful,” says Girrbach. “Growth can outstrip capacity. The world is awash in opportunity. We want to make sure we don’t drown in it.” 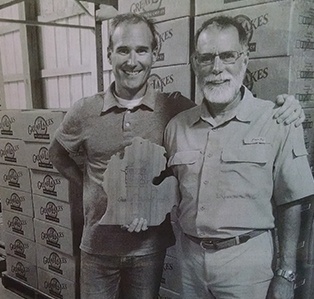 In addition to consumer success, the company continues to receive accolades. Great Lakes Potato Chip Company was named one of the “Top 50 Michigan Companies to Watch” in 2014, and the following year the chips were voted the #1 Kettle Chip in the Country by the Chicago Tribune. The chips received two Gold Ribbon awards for best Kettle Chip and best Tortilla Chip at the 2016 Saratoga Springs New York National Chip Festival. Great Lakes Potato Chips was also awarded the first place Growth Award at the Crain’s Business 2016 Annual Food Summit in Detroit.

The company both exemplifies and adds to the success of the “buy local” focus of the market. By focusing its efforts regionally, Great Lakes Potato Chips has been able to build consumer awareness of its brand. It also helps the state maintain its agricultural success, purchasing nearly all its potatoes from Sackett Potatoes in Mecosta County. “Michigan is number one in the country in chipping potatoes, and number five overall,” says Girrbach. Thanks, in part, to Great Lakes Potato Chips.